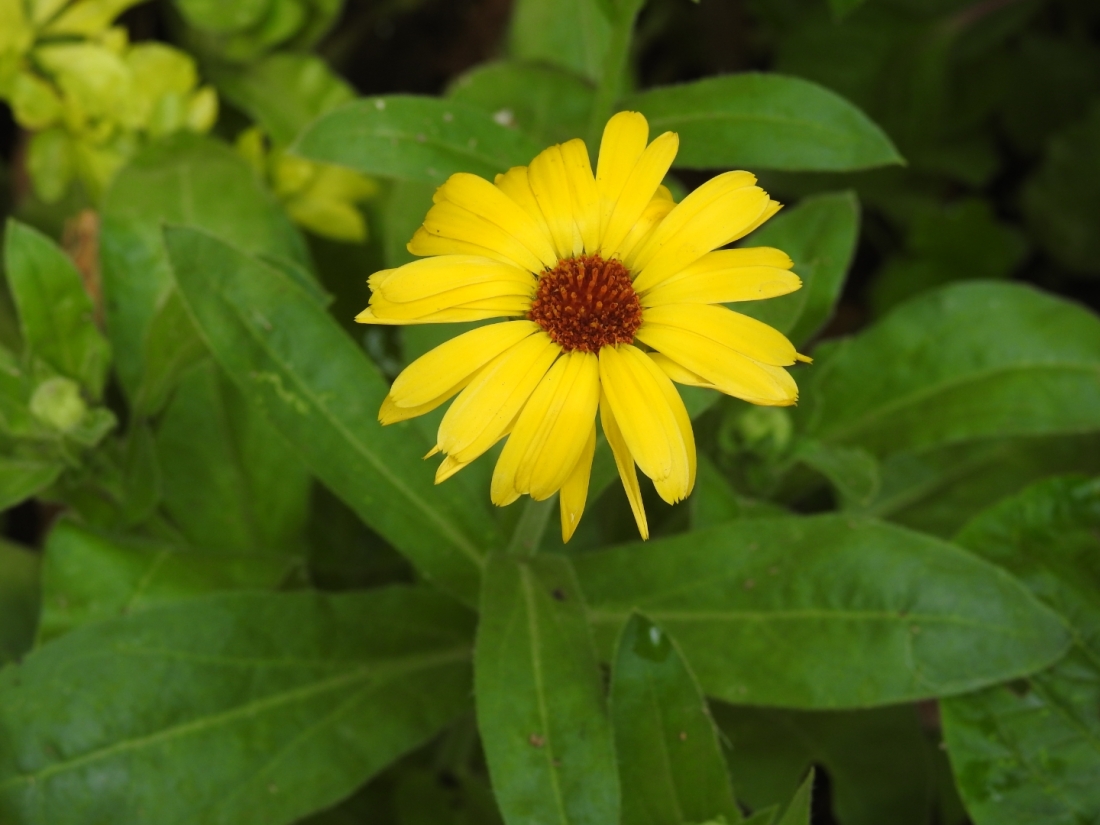 It is surprising to know that Assam’s State Bird, the White Winged Wood Duck is listed as endangered in the International Union for Conservation of Nature’s (IUCN) Red List of Threatened Species and is decreasing at a fast rate. Similarly, Assam’s state flower, The Fox Tail Orchid, the state tree, Hollong and the state animal, The One Horned Rhinoceros are also in the verge of extinction.Man made activities like deforestation, encroachment etc,. have degraded their habitat and reduced the biodiversity of plants and animals.

Biodiversity has an intrinsic value for human existence. People are dependant  directly on it.

Truth be told, biodiversity is worth more than gold!

It’s not the end of the world

It’ll go away even before you realize!

Although the world seems to have stopped,

The sun’s still shining and showing you that it’s not the end,

It’s just the beginning of a new experience!

Do something that you always wished to do

Pay attention to the opportunities that you missed

Had the lockdown hadn’t been established!!

She does every work without asking questions

She dedicates her life for the nation

She respects everyone and likes to be respected

She enjoys every moment of her life

She is a teacher, a mother, an influencer, a women

This International Women’s Day, I stand proudly before 7.7 billion people waving the green, purple and white. I truly believe that women are as strong and powerful as men and they can achieve heights if they wish to. Everyone is beautiful in their own way.

Litres of water you deliver

You wipe all the tears of people like an eraser

And drive through the hills like a bike racer

I saw your body covered with plastic and that is all I can remember.

With the coming of winter holidays and online streaming services becoming more and more popular, Netflix has grown into one of the most influential media streaming services in the world. You can stream anything starting from Netflix’s original series like Stranger Things and The Crown to TV favorites like Sherlock Holmes, Doctor Who, Friends, Orange is the New Black and so on. Now you can also watch Hindi movies and shows on Netflix like Hotel Mumbai, Cobalt blue, Little things and Leila. Netflix carries an impressive library of movies, TV shows and documentaries. Browsing through all of them is not an easy task unless you know a show by its name. So, if you are searching for good shows or movies on Netflix here are some recommendations. 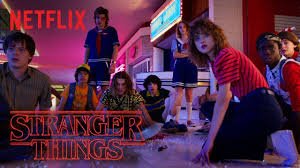 The very first show that you need to watch is Stranger Things. It is an American science fiction horroe web television series created by Duffer Brothers. It has three seasons with 8 episodes each, Set in the fictional town pf Hawkins, Indiana, in November 1983, the first season focuses on the investigation into the disappearance of a young boy and supernatural events occurring around the town, including the appearance of a girl with psychokinetic abilities who helps the missing boy’s friends in their search, The second season, titled stranger things 2, is set one year later in October 1984 and deals with the character’s attempt to return to normality and the aftermath of the events frpm the first season. The third season, titled Stranger Things 3, is set in July 1985. The fourth season is likely to be released in December 2020 though no exact date has been shared.

If you love eating street food, this is the right documentary for you. This documentary celebrates different street food dishes and traditions around the world. Netflix released season 1 on 26th April 2019. Season 1 takes us to Asia, stopping at nine cities along the way. The cities that were featured here are Bangkok, Osaka, Yogyakarta, Chiayi, Seoul, Ho Chi Minh City, Singapore, Cebu city and Delhi. Among dozens of other dishes, the most interesting ones are the Nilarang Bakasi in Cebu city, drunken noodles in Singapore and Nihari in Delhi that’s so popular that people line up for hours to get a taste.

If you tell me to describe Delhi Crime in one word, I would say marvelous. Delhi Crime is an Indian cine drama web television series wriiten and directed by Richie Mehta. Delhi Crime takes up the uneviable task of depicting the police officials at a point of time in with the procedure. The seven episode show details a female led, five day long pressure cooker search for six male perpetrators behind the 2012 Delhi gang rape also known as the Nirbhaya rape case. Each character is designed to represent a different socio cultural dimension of the case. The most startling scene in a show full of startled people is the one where DSP Vartika Chaturvedi interrogates the prime suspect Ram Singh were he confesses his actions towards the rape victim. This series can be said to be one of the best Indian drama web television series. The second season is likely to release in 2020. According to reports, this will be an anthology series where the cases will change but the characters will remain the same. 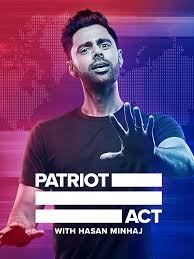 If you are interested in politics, this one’s for you. Patriot Act with Hasan Minhaj is an American comedy web television talk show hosted by Hasan Minhaj that premiered on 28th October, 2018 on Netflix. This show aims to explore the modern cultural and political landscape with depth and sincerity. The show’s host, Hasan Minhaj brings his unique comedic voice and storytelling skill to explore the larger grim trends shaping our fragmented world. With four seasons till date, the show has won an Emmy, a Peabody Award and two Webby Awards. My favorite episode is episode 6 in Season 3 where he talks about the Indian Elections discussing the Bharatiya Janata Party, Prime Minister Narendra Modi and the opposition including the Indian National congress and its Rahul Gandhi.

Looking for something mysterious? 13 Reasons Why is an American teen drama web television series developed for Netflix by Brian Yorkey, based on the 2007 novel Thirteen Reasons Why by Jay Asher. The series revolves around 17 year old high school student, Clay Jensen and his deceased friend, Hannah Baker who takes her own life after having to face a culture of gossip, bullying at her high school. It also shows how her family and friends had to face the consequences. Three seasons has been released with 13 episodes each. After watching this series you will realize how important one’s life is and how easily one can lose one’s life.

Sit back, relax and enjoy your popcorn!!

Last week when I was travelling by bus, I saw a person beating a dog with a stick. I was very shocked. I came home and I googled cruelty against stray animals. A report stated that Cruelty against stray animals is on the rise in India amid lack of effective laws. As I browsed I saw more articles and I realised that this is a practise that has been going on from various years and that there is no central agency where all this cases can be documented. When you see someone beating street animals here are two things you can do:

2. Take a video or photo from your mobile phone as an evidence to document the crime.

Hola! This is me

When I walk by the road in search of food,

I get nothing but a stick on my brown coat.

Weeping in agony I go back to my mom

Looking at me she asks, ‘Scarbrow! Did you do something?’

Nodding my head, I reply ‘No’

Sitting under the tree I think hard

Putting some hard feelings in my heart.

Realising humans to be without soul,

Without brains and without a kind heart.

Are we not capable of their love?

Sitting under the tree I think hard.

Trees are the most important part of an ecosystem. We humans are cutting all the forests for our own wants and exploiting natural resources which is bad. In fact let’s face it isn’t it worse? It increases the temperature of the earth which causes global warming. Now you’ll say, “We know it. We have been studying about that since kindergarden.” My answer would be then why are you not doing anything?You do know Greta Thunberg who is leading the world climate change strike every friday is 16.

Human wants are unlimited but the means to satify these wants are limited. Instead of exploiting our natural resources lets join our hands to save them.

Here’s a poem of a tree who wants to run away from us humans. But if it runs away how will we survive?? How will we get our food?? Moreover how will we get oxygen?? We cannot live all our lives wearing oxygen masks or eating choco chips. In fact choco chip is made from chocolate which comes from a cocoa tree. We are trapped.We cannot come out of this untill we save our trees.

Water droplets falling on me

All dust and pollution washed away from me

New leaves are coming out of me

I am dancing out of joy at the beats of the rain come see!

Will it rain forever??

Will it destroy my leaves again??

Will I be able to feel the heat and bathe in the sun again??

Will I be able to bear flowers and fruits again??

I wish I could get away from all this.

Go to my dreamland with my fellow trees

Where there would atleast be guarantee

Guarantee of a clean sky, a clean land and a clean sea

But unfortunately I am stuck

Stuck between the devil and the filthy black sea!

Floods wreak havoc in Assam every year, and this year has been worse. The damage to life and property has been enormous. There are thousands of people who, having lost their homes, are still living in relief camps. This is a tribute to those people.

Millions of dreams fade away

And some dreams stay astray

You see Who Cares??

We are the ones who care

We the sufferers of pain!

The sufferers if rain!

Think wisely and join me to save the people of Assam from their distress for they are not only humans but our brothers and sisters.